Behavior Analysis: It’s not just a job, it’s a Passion

Behavior Analysis: It’s not just a job, it’s a Passion

I love Applied Behavior Analysis. When I say LOVE, I mean I have a passion for working with children that need a specialized way of learning. It took two major life experiences until I picked up on the signs that I was meant to work with children with special needs.

Raina. She was my introduction to a Picture Exchange Communication program and drove my passion and determination to help children. I was at a nutrition clinic in Guatemala with an organization called Hearts in Motion when a group of us saw a nervous, shy little girl. She was dropped off at the clinic and had not spoken a word. One of the leaders in the group drew a ball on an index card (because Boardmaker, laminators, velco and fantastic PECS folders are limited in Guatemala) and started attempting to get Raina to make a communicative exchange. We had limited time with Raina and making such a big change in her communication methods wasn’t as doable as I hoped it would be. I left her in smiles and with plenty of hugs, but no communication. The time and training it takes to implement a communication system wasn’t available, but it was necessary. I returned with the drive to help children, more importantly to learn how to help kids talk and communicate. I was told that I wasn’t going to Guatemala to change the people, but the people would change me.

Going to Guatemala won’t change the country, but it will change you. 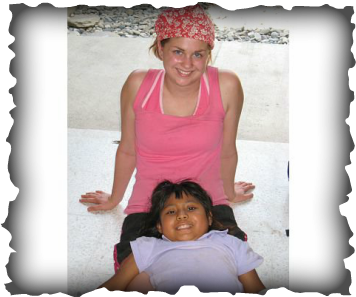 ​It wasn’t until I was in graduate school that I learned the most effective way to help children communicate. While in graduate school, I picked up a part time job as a clinical living support provider with a family of a nine year old boy. I was introduced to a behavior analyst and the field of Applied Behavior Analysis. My part time job turned into all I could think about and I researched and put together as many tools as I could to teach this boy how to imitate, match and communicate. I had absolutely no idea what I was doing and scheduled meetings with the child’s behavior analyst and learned as much as I could. I followed the behavior plan and programs, but I needed to know more. I then signed up for ABA courses on top of my graduate school course load and decided I needed to be a behavior analyst for this nine year old boy and for all of the kids like Raina. I learned fast, completed my courses, and worked with a countless number of children and families before finally becoming a Board Certified Behavior Analyst.